Living our Values in 2017 – Media Edition

This was originally going to be an article about a bunch of ways you can involve your kids in your politics and beliefs, but I got a little carried away with my media suggestions, so we’re going to start there, and I’ll be back soon with the other things the Parenting Geekly Family is doing to live our values in 2017 – including writing a Family Mission Statement!  I kept these suggestions as mainstream as possible to keep the barrier to entry low. You should be able to borrow or find most of these things on Amazon, streaming, or your local library.  (Note: Post conatians Amazon affiliate links).

It can be intimidating to think about “resisting” or “revolution” or protesting when you have children. The good news is that you can teach your kids about justice, inclusion, diversity, activism and social justice without ever leaving your house. The easiest way to incorporate the ideals of equality, social justice, representation, and action is to make sure the media your family consumes showcases those topics.

Here is a very brief list of some of the media we’ve consumed recently:

Books
Goodnight Stories for Rebel Girls – Kitty received this as a Christmas gift from her Aunt Karen. It features an intersectional (white, black, Asian, trans, cis, young and old are all represented) selection of women who did what they felt was right, all delivered in short one-page stories with beautiful illustrations. This beautiful hardback book is currently on back order until February 2017 – but if you just can’t wait Amazon has a Kindle version. 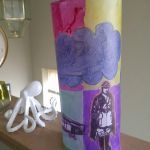 Rad Women series – I was introduced to the Rad American Women and Rad Women Worldwide books by my daughter’s fourth-grade teacher. Every year their school holds a lantern festival before winter break. Each child designs and creates a lantern. Some years the classes make punched-tin lanterns or lanterns from clay or decoupaged milk cartons. This year every fourth grader picked a woman from one of these books and decorated a vellum lantern with her portrait. It was a super cool project, and these are super cool books. Kitty’s Rad Woman was Bessie Coleman, the first African-American Woman and first Native American woman to become a licensed US pilot!

Ms. Marvel – Kamala Khan is a teenage Pakistani-American, and Marvel’s first Muslim superhero. The team of creators is diverse, and according to writer G. Willow Wilson: “A huge aspect of Ms. Marvel is being a ‘second string hero’ in the ‘second string city’ and having to struggle out of the pathos and emotion that can give a person.” It’s appealing to wide range of ages. My husband and I enjoy it as much as 9-year-old Kitty does. This trade paperback collects the first issues into a single volume.

Movies
Star Wars – Not only do the Star Wars movies feature strong women and (at least in the two most recent films) racially diverse casts, they show a group of people fighting against evil. When you watch these beloved classics, make sure you point that out!

Captain America Civil War and Civil War comic books – Marvel showed two sides fighting for their strong opinions about social justice in this comic book series (which you can buy as a collection). The film is a condensed version but shows the same message of friends fighting on opposites sides for what they think is right. This could be a great entry point for conversation if you have close friends or relatives with opposing political opinions. 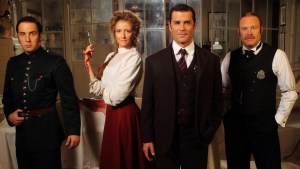 The cast of Murdoch Mysteries

Murdoch Mysteries – This period police procedural from Canada was my big surprise love this year. Available on Netflix, it premiered in 2008 and take place in the 1890s. While the main cast isn’t diverse, it deals with issues of racism, women’s suffrage, social justice and progressive politics on a regular basis. There’s even an episode about abortion. I watch it with 9-year-old Kitty, but it does have some mild violence, mild gore (realistic dead bodies), and touches on adult themes (murder, sex, religion) – so maybe pre-watch it before you get the under 12s involved.

MUSIC
The Hamilton Soundtrack – If you can’t find something to talk about after listening to this race-bent take on our Founding Fathers you’re not trying. The creators and the racially diverse cast has talked about not feeling ownership of the story of the founding of our nation because it was done by a bunch of white guys. By casting people of color as the Founding Fathers, and using hip-hop in the soundtrack, they hope to make the story of the American Revolution accessible to all.
More easy ways to incorporate inclusive media? Listen to music from genres and cultures you don’t normally include. The recent inclusion of jazz to our repertoire has introduced our kids to Nina Simone, and her “Young, Gifted, Black” performance on Sesame Street. Seek out movies with racially diverse casts, or films that feature minority casts. Watch international films and TV (streaming has made this super easy!) Avoid films and TV that whitewash. Talk to your kids about diversity in their media and why it’s important. Don’t understand why it’s important? Here, let me Google that for you.