Parents’ Guide: Can I take my kids to X-Men: Days of Future Past

May 25, 2014 By Sharon Feliciano in comics, marvel, movies, reviews No Comments 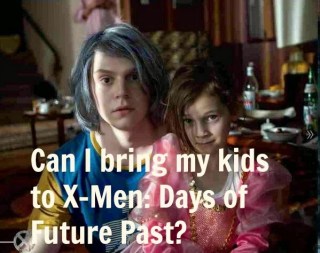 Hey there!  This is going to be a quick summary, as I’ve already had a few email requests for my opinion on the age-appropriateness of this one and I want to bang it out in case anyone is considering going this weekend.

As usual, I had no qualms about taking my own kids.  Thirteen year old Nate and seven year old Kitty really enjoyed it, though there were some moments that were a bit hard for Kitty.

Here were the moments that stood out to me being a tad harsh for sensitive kiddos or stricter parents:

In addition, I am always worried that time-travel plots are confusing for kids.  I asked Kitty to summarize the plot in the video posted below (no real spoilers) and she seemed to get it, though as usual, she had a hard time following the many characters inherent in these ensemble action movies.

Here are some of the things we talked about after the movie:

So my verdict? This one earns its PG-13 rating.  Even my seven year old had some hard moments.  13 year old Nate did just fine, and I would imagine most kids over 11 would be okay.  Really sensitive kids and younger kids might want to skip this one or at least wait until it can be viewed at home.

« Costume Ideas for Women (and girls!) Without Sexy in the Title » I gave up on work/life balance.