Parent’s Guide: Can I take my kids to see The Avengers?

May 4, 2012 By Sharon Feliciano in Uncategorized No Comments

Update:  I saw The Avengers a second time during daylight hours and stayed awake for the whole show, I stand by the following review as written.  The only thing I’d add is that the 155 minute running time is a long time for a little one to sit still (and to hold their bladder).

Full disclosure:  I went to a midnight showing of The Avengers and dozed off a few times.  We also brought 5 year old Kitty, but she fell asleep during the previews.  I am going to see a matinee this afternoon and may supplement my recommendation then. Since “Can I take my kids to the Avengers” has been a FAQ on our Twitter feed, and many of you will want to go after school today I thought I’d give you my first impressions. 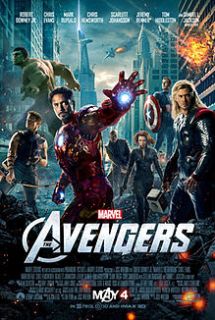 The movie was excellent.  The story of the Avengers was skillfully worked.  I was a bit concerned that with such a large cast of characters the storytelling would be muddied and difficult to follow.  This wasn’t the case at all.  Director Joss Whedon (Firefly, Buffy the Vampire Slayer) is experienced with working with ensemble casts in complicated stories. His experience and talent showed in the fantastic storytelling as well as the slick cinematography which followed each character in an epic battle without getting jumbled.

The plot was easy to follow, which is a plus for younger viewers.  I dozed at several points in the film (due to it being a midnight showing, and me being exhausted – the movie was plenty exciting) and was still able to follow along.

Violence may be a concern here, more than it was on the previous origin story films. But, like those other films, it’s all “comic book violence”.  Most of the more intense violence occurs against obviously non-human alien/robot beings, but human characters we are attached to get hurt and even die (I cried).  There are tons of advanced weapons from Hawkeye’s tech-assisted arrows to big guns.  The fighting starts within the first few minutes and doesn’t let up until the end. It’s very, very exciting but the fast-paced, non-stop fighting may be too intense for younger moviegoers.

Whedon knows his source material and his Hulk is the most faithful to the comic character we’ve seen on screen so far.  In a nod to a notable comic book scene Bruce Banner describes a suicide attempt. Ironically, later in the film Hulk becomes the primary source of comic relief, albeit with his rather violent antics.  Robert Downey, Jr. again shows why he was the perfect casting choice for Tony Stark by delivering pithy one-liners that while sometimes risque, will mostly go over the heads of the under 13 crowd. Besides a bit of double entendre, the sexual content is minimal.  There is a lot of mild (damn, ass, son of a bitch) swearing.  Tony Stark drinks (duh).

There is a fair amount of talk about why the heroes choose to fight crime and the camaraderie and loyalty of the Avengers to each other is evident. There are many examples of teamwork and of acknowledging each other’s strengths and weaknesses. Watching the Avengers fight as a team was delightful, during the climactic battle I was grinning from ear to ear.  On another positive note, this is the first superhero flick that really gives us female characters to root for.  Black Widow (in an expanded role from her part in Iron Man 2) and Agent Maria Hill are both highly capable, likeable female characters who kick butt right along with the rest of the team. Refreshingly there wasn’t a “damsel in distress” in the film.

My personal little complaints: There is an off-hand joke about being adopted that I was bit sensitive to as I have adopted siblings, and I was annoyed that they showed Steve Rogers riding a motorcycle with no helmet.

I’d say this movie is perfectly fine for a kid over the age of 8 who has seen the other films in the franchise and isn’t sensitive to comic book violence and who has a parent with them. After watching it last night, we are taking Kitty (who was super disappointed this morning) back this afternoon, clearly for our kids we think it’s fine. If you are a stricter parent whose child hasn’t been exposed to big Hollywood action flicks its PG-13 rating is pretty spot on.

« Light up LED building bricks » Mothers Day Gifts for (or from) Geeks!