Today I attended that Activision Games for Girls Summit.  It was a great chance to talk about games for families in a positive way.  The event was geared for the typical Mommy Blogger’s audience, and so I seemed to be one of the few in the audience who was not surprised by findings that girls (and kids in general) who game with their parents experience a bevy of psychological and physical benefits.  People are finally getting what we geeks have known all along, video games aren’t going to screw your kid up.

While geek culture has gone “mainstream” it seems that a lot of  parents haven’t followed suit.  The moms in attendance talked a lot about restricting screen time, about not letting their kids play any non-kid games, and some seemed generally concerned about letting their kids play any video games at all.  At one point I asked Nicole Armstrong, the Director of Marketing at Activison to speak to current attitudes on advertisitng to women.  I brought up Battlefield 3’s horribly allienting “99 Problems” ad campaign, and praised her for Activision’s inclusive Call of Duty “Gimme Shelter” ad.  I had to stop to explain the games, the ads, and even the songs.  This was definitely not a room of gamer moms.

I was really excited to see industry juggernaut Activision identifying young female gamers as a priority demographic.  During the Summit we were able to try out six of the most recently released games that were developed with young girls in mind.

The most impressive of the games was Wappy Dog.  It comes with a robotic dog that responds to commands through the DS.  It’s freakin’ adorable, I want one for myself! It was definitely the biggest hit with all ages in the group.

To help celebrate the launch of these games, Activision sent each attendee home with a bag full ‘o awesome.  Over the next few weeks I will be giving away several gift packs, which are just in time for the gift-giving holidays!  Stay tuned!

Burning down the house

My phone rang tonight while I was making dinner.  I didn’t recognize the number, so I let it go to voicemail, but minutes later I heard Super Dad’s phone ring.  Here’s what I heard:
“Hello?  Yes, this is Nate’s dad.”  And then a looooooong silence.
“Okay, I’ll talk to him about that, I know he’s been on the receiving end of that and he didn’t like it.”
More silence.
“We’ll talk about it with him.  Have a nice night.”
Uh oh.

So I’m thinking that my kid has called a kid a name or excluded them from something.  Super Dad explained that it was much more dire: Nate has burned down someone’s house.  In Minecraft. 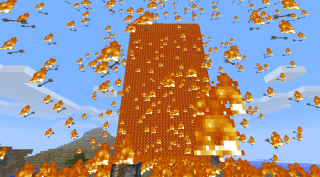 We had a talk with Nathan and he confessed to the virtual arson, telling us he did it in retaliation when the kids (brothers) blew up a chest containing his valuables.  We discussed the golden rule, how revenge is never a good answer (c’mon kid, we *just* finished watching Moby Dick didn’t you learn anything?) and how I never wanted to hear from another (overbearing) mother about how he destroyed something in Minecraft…on a private server run by a family friend, which Nate invited them to play on.

All was said and done until SD told me that the mom had told him that she planned on contacting the school about “this behavior”.    WHAT?

I called the lady back and she told me “oh, I just spoke with your husband”.
“Oh, I’m aware” I said “I just want to follow up.”

I explained to her that he had done it retaliation.  She insisted that her kids would never do that (for the record I hate when parents say ‘My kid would never…”). Clearly my kid was Minecraft Satan running around and burning down the creations children had toiled over.   She told me that her precious snowflakes had been working on this particular creation for months (funny, since they’ve only had access to the server for a few weeks) and they were devastated.

I assured her that we had spoken with Nate about not retaliating.  That if someone were to destroy his things in the future that he would ignore it.  I also explained that they were playing on a PvP server, and sometimes people – often not Nate – would break things.

I then delicately asked “So…my husband mentioned that you were going to speak to the school about this.  I was wondering what you were hoping that would accomplish?”  She said that she wanted the school to talk to the “kids who were doing this” (my kid) about being kind and not destroying things the other kids (her kids) had worked so hard to make.  I told her that I really didn’t think that the school could do anything about what happens in a video game.  She explained that before they came to this school they never had a problem with people destroying the kids’ Minecraft stuff, and that because “some kids” at this school thought that kind of behavior was funny the teacher should talk to “those kids” who were doing the damage. I offered that I thought the way that we were handling it – parent to parent – was the appropriate way to handle an issue, and that ideally the kids would work it out themselves.  I assured her that if there were to be another issue like this that she could call me at any time and I would speak to Nate and give him appropriate consequences if required.   I don’t think she’s going to call the school.

The last time I had to call a parent was when his kid inappropriately touched my kid.  A slight that happened in videogame – as long as it didn’t involve bullying – falls firmly into my “work it out yourself” policy.   What do you think?

Urban Ministries of Durham has put out “Spent” a game that simulates the decisions that the underemployed in America have to make every day.

Playing the simulation with Nate was enlightening.  He constantly chose the options like “Take the money out of your kid’s birthday card” and  “Miss the kid’s school play because you were offered a side job”.  I asked him to really think about how that would make him feel and he said “I’d be mad, but at least I’d have food.”  As a mother, I made the opposite desicions, sacrficing the money almost every time it would somehow affect my child.

We were able to talk about what it meant to be “underemployed” and some of the myriad of reasons why someone with a child would have to take a minimum wage job.  This was a fantastic way to teach Nate about the sacrifices people have to make everyday.

Try your hand at Spent here.

Did you succeed? Did your kids try it?  How were their answers different than yours?  Share in the comments!