Ah, poor Mr. Johnson can’t even catch a Broadway show without Grover screwing it up.

As a huge Sesame Street nerd and big fan of Marvel Superheroes, this totally made my day. Bonus points for Monster Bono. “Sorry, this is Monster Bono’s first show”. Ha!

Review of “Being Elmo: A Puppeteers Journey” 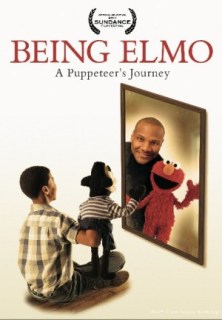 Last Sunday Kitty, Super-Dad and I were lucky enough to attend a screening of Being Elmo: A Puppeteer’s Journey as part of the Seattle International Film Festival’s Film4Families series. Being Elmo is a documentary about the life of Kevin Clash, current Head-Muppet-Dude over at Sesame Street and performer of everyone’s favorite furry four year old, Elmo.
Clash’s story is told starting with his upbringing in a working class town on the outskirts of Baltimore.  He started making puppets at age nine and with the support of his loving parents (seeing his mother and father talk about him with such delight is one of the highlights of the film), was doing two local television shows before he graduated high school.
After an introduction from his mentor – Muppet builder Kermit Love – Clash started working for Jim Henson on Henson’s film Labyrinth .  Labyrinth was my favorite movie as a kid and learning that Clash worked the Firey who popped his eyeballs out, a scene which creeped me out, opened my eyes to breadth of his work. Elmo may have been a bit after my time, but I had been watching Kevin Clash puppeteer for my entire childhood.
After Labyrinth he moved on to Sesame Street where he performed Hoots the Owl before taking over Elmo from Richard Hunt who was frustrated with the Muppet that he performed as a gravelly voiced Neanderthal.  Taking a cue from Frank Oz who had told him that he needed to find the “one thing” to focus on with each Muppet character (as examples Oz told Clash that he performed Fozzie Bear as an old vaudevillian and Miss Piggy as a trucker who wanted to be woman)  Clash decided that Elmo would represent “love, hugs and kisses”.  It was this trait that made Elmo so popular with preschoolers.
Some of the most touching moments in film come as Clash discusses his role as a father to his daughter Shannon, when Clash talks about being made fun of for “playing with dolls”, and when we see Clash mentoring a promising 8 year-old puppeteer named Tau Bennett.  Be warned that the movie does touch on some sad moments.  The death and memorial of Jim Henson are visited.  Dying children ask to meet Elmo as their final wish.  One such visit is shown, and I just about lost it when the sick child’s dad thanked Clash with tears in his eyes.  Despite these two sad but important moments, the movie was joyous, with the audience smiling almost non-stop.  It was a celebration of not only the life of Clash but of Elmo, of puppeteering, of family and of the unbounded imagination of children.
This film would especially resonate with children who have hobbies that they are passionate about.  Clash touches on overcoming the teasing of his peers and how he decided to pursue his dream no matter what anyone thought. What I really took away from it was that with hard work and the support of your parents any child really can achieve their dreams.  The older kids in attendance seemed to leave the theater truly inspired.
Even though Kitty happily sat through the film, I’d recommend it for children who are a little older.  At four years old she was a little over excited and would yell “ELMO!” whenever the red monster appeared on screen, but otherwise she sat transfixed at the story of Kevin Clash.  Be forewarned that if your child is blissfully unaware that Elmo is a puppet behind the scenes footage may spoil that magic. At just over an hour, the film is the perfect length for kids.
Both before and after the film we had the opportunity to speak with both Clash and Constance Marks, the director who so skillfully wove together over six years of fresh interviews and film with vintage television clips, family photos and behind the scenes footage.  Marks had her daughter with her, and I can’t help but think that young Sophia had some input as the film was entertaining for all ages.
Make sure that you check out Being Elmo when it goes into limited release throughout the country later this year. No one in the family will be disappointed.
I will write more about the meet and greet tomorrow.

Kitty and I met Elmo this Weekend!

I’ve been dealing with a mystery illness, so I haven’t posted much in the recent days, but I did want to share this fantastic photo of me and Kitty with Elmo and his friend Kevin.

We were at a screening of “Being Elmo: A Puppeteer’s Journey”.  The film was delightful and the meet and greet afterward allows me to check “Meet a Muppet” off my bucket list.  I hope to have details and a full review up by the end of the day. 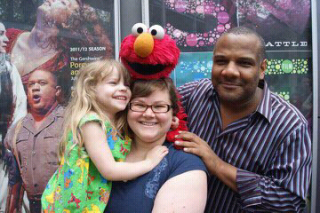