Elmo will live on.

Nov 20, 2012 By Sharon Feliciano in muppets, Sesame Street No Comments 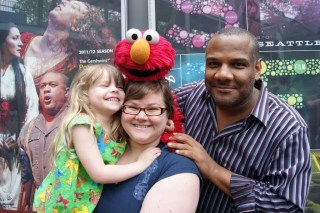 If you read this blog you probably know that I am HUGE Sesame Street fan.  One of the highlights of my “Life List” (instead of a morbid “Bucket List” I prefer to keep track of the cool things I’ve already had a chance to do) is meeting Kevin Clash, Elmo’s puppeteer

The news today that Clash has resigned his post has left me heartbroken.  Not because of Elmo, as Sesame Workshop said in a statement:

“Elmo is bigger than any one person and will continue to be an integral part of ‘Sesame Street’ to engage, educate and inspire children around the world,”

We all adjusted to “new” Kermit, and after a few episodes and some time, kids won’t notice a difference with Elmo either.  Clash has created a legacy with Elmo that will survive his leaving.  Though, I’m sure giving up performing Elmo will cause him some grief.  I’m pretty sure Elmo has a life of his own, and I
m pretty sure Clash loves him.

I’m more upset because Clash was a huge part of the Sesame Workshop team.  He co-executive produced Sesame Street, and was the Muppet Captain on the show.  Footage from the documentary Being Elmo  shows Clash traveling around the world to teach international versions of his signature Muppet how to, well…Be Elmo.

Sesame Workshop is one of my favorite organizations.  They offer free early-childhood education to kids around the world.  They teach kids internationally about social issues that matter to them.  In the United States they have recently launched initiatives to help military families deal with Iraq-War related injuries, with learning to save money and ending childhood obesity.  In Israel, Pakistan and Jordan they teach children about cultural diversity, in Africa they teach kids about AIDS.  They are a fantastic organization, and losing Clash is a sad moment for them and the children they serve.

I don’t know if the accusations made against Clash are true or not. I met Clash last year, and I didn’t get a single sinister vibe from the guy. On the contrary, he was one of the nicest and most gracious people I’ve ever met.  Regardless, it’s a real loss for kids everywhere.

As Super-Dad said of the situation:  “It sucks when stuff like this happens.”

Everyone kinda figured that once the “real” trailer for the new Muppet Movie came out we had seen the end of the parody videos.  I’m super happy to report that the filmmakers/promoters weren’t quite done with these hilarious clips.  The latest pokes a bit of fun of the trailer for “The Girl with the Dragon Tattoo” and the film promoting process in general.

Here’s the original trailer in case you have been living under a rock missed it: