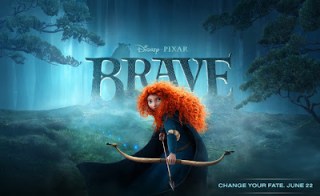 Last night we had the chance to see Disney Pixar’s Brave as part of the Seattle International Film Festival.  I sit on the SIFF Parent Committee and we were so thrilled a few months ago when SIFF programmers told us that they would be screening it a full twelve days before its release.

Brave tells the story of Scottish Princess Merida as she fights her mother’s wish to marry her off to a member of an allied clan.  Obsessed with destiny, Merida turns to the supernatural to try and change hers with disastrous effect.  To fix what went wrong, she must take her mother on an adventure where they learn the importance of listening and compromise.

There’s been a lot of talk about what a strong character Merida is.  And indeed, seeing a princess who is not only proficient in combat arts but actively fights against being paired up with “Prince Charming” was refreshing.  The only love story in the film was the one between Merida and her mother.  The mother/daughter relationship was so well written and some of the aforementioned tears were the result of being reminded of my own teenage interactions with my mother.  Teenagers can be cruel, parents can be angry and unyielding.

At times it was laugh out loud funny, other times it was scary, and I spent about 25 of the 90 minute running time sobbing.  It had adventure, suspense, and sentimentality.  It was Pixar’s doing its best at everything Pixar does best.

So…”Can I take my five year old to see Brave?”  I’d say “yes”, with a few caveats.  There are some scary scenes with vicious bears (there are also plenty of cute scenes with bears).  Kitty was scared and grabbed my arm, but didn’t get so upset that we had to leave.  There was a younger child in the theater who cried during some of the more intense scenes. There are a few a lot of animated bottoms shown. There is a scene involving a cleavage joke.  There was a real fear at the end (even for me) that the main conflict was not going to be resolved in a tidy way.  It’s pretty typically Pixar in that there is genuine suspense.  I’d say it’s fine for most kids 5 and up.

Last night Nate and I went to see Captain America: The First Avenger.  This movie has everything: Nazis! Dancing Girls! Mythology! Technology! Dames! Old Ladies with Tommy Guns! Car Chases! Oh, and actually some nice dialogue about being right and good. 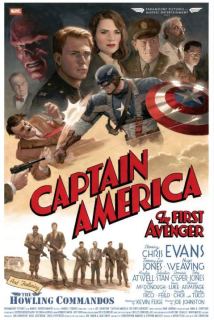 Because of the quaint “Go USA!” storyline that is inherent in telling Captain America’s origin, it would have been easy for director Joe Johnston and the filmmakers to go with a tongue in cheek “we’re in on the joke” approach.  With help of a lovely script, a nice smattering of 2011 CGI, and a fun supporting cast, Johnston is able to depict this somewhat clichéd branch of the Marvel Universe without being trite or disrespectful.
Chris Evans shines as Steve Rogers.  He plays the character with such heart and sincerity that the over the top “good guy” stuff doesn’t ever come across as corny or forced.  The audience believes that Rogers is archetypical American hero – earnest, completely virtuous and almost stupidly brave – without doubt.

My main complaint is the  poor character development of Hayley Atwell’s Peggy Carter.  The filmmakers seem to have tried tocreated a strong female character to not only serve as a Roger’s love interest  but to counteract the male dominated cast (the only other female characters are the aforementioned old lady, a hysterical mother, the occasional army nurse/secretary and Howard Stark’s dancing girls).  They really missed the mark, and Peggy Carter seems more like a caricature of a strong female character as opposed to an actual strong female character. She comes across as an over the top ball-buster whose background is never explained.  Even the love story between her and Cap is poorly developed and therefore unbelievable.  Her main purpose might have been as a nod to hardcore Captain America fans who will surely recognize the name from Cap’s extensive comic book history.

I also found the CGI used to create the tiny, pre-Super Soldier Steve Rogers completely distracting.  In some scenes it looked great, and so I was distracted by trying to figure how they did that.  In other scenes the proportions looked off and I wondered why they did that.  In particular there was scene of Rogers in a car with Carter where he looked so much smaller than her that I worried that he should have been in a car seat.

Balanced with a well-written script, the film suffers no shortage of action and fighting sequences, and comes with the accompanying violence and death.  The PG-13 rating seems apt.  Know your child and their sensitivities before you take them.

All told, it was an entertaining film.  Yes, much of the plot was preposterous, this IS a super-hero movie after all and suspension of disbelief is a vital part of enjoying such a flick.  An all-star cast, a fully developed world, lots of laughs and nods to fan favorite characters make this a great summer movie.