So something has been bothering me for the past few months.  The idea of “hot girls” pandering to geeks has been a hot topic.  I even commented on this subject on this very blog.  I think it’s important to talk about this, I do.  But here’s what is rubbing at me:  What about those of us that don’t fit the mold of what is traditionally considered “hot”?  I mean, if you look at the Oh You Sexy Geek panel that was at Comic Con this past week, there was not one plus-sized panelist, nor any of color.  It didn’t bug me until I started to realize that it felt like high-school.  I wouldn’t have been invited to sit on that panel because I don’t fit someone’s ideal of “sexy”.  It was like when all the cool kids sat at a lunch table and told you that you weren’t welcome.  I know that it wasn’t the intention, but instead of feeling like a celebration of girls who like nerdy things, it was a celebration of HOT girls who like nerdy things, which just seems to defeat the point to me.
The panel explored what it means to be sexy and who defines sexy, which are really important topics, but when you fill a panel solely with people who fit the standard ideal of “sexy” it kind of waters it down a little.   It would have meant more to me if a Sexy Geek of Size (Robin Thorsen comes to mind) or even a sexy male geek (I’m not including Chris  Gore whose only contribution to the panel was to comment on how sexually attractive he found his fellow panelists, ewww.) was included on the panel. It’s easy for a famous model like Adrianne Curry to say that “Sexy is how you feel” while talking in her wig cap.  She may have been in a wig cap, but she’s still a supermodel.
Is it just taken at face value that I’m *not* pandering to men because I’m fat?  It’s just a given that I’m a nerd?  I have a few kids, and it had nothing to do with midichlorians so obviously someone thinks I’m sexy.  Is my opinion on nerdy things not as important because I’m not a hot young girl? Aren’t we talking about Hot Girls that feel that way?  Why does it feel like once again it’s just another way for everyone to celebrate how great it is to be young and thin and pretty?
Seth Green, who was in the audience spoke about how the geek community should be more inclusive in general.  I *think* that was the point of this panel, that sexy geek girls should be welcomed, but instead the panel’s thesis seemed to imply the opposite.  It made sexy girls seems more important once again, and in an arena where I had always felt that maybe, for once, how I looked didn’t matter.

Update: After thinking about this a bit more and reading your comments/emails I’ve written a little more, you can find that here.

Geek Girls: There Can be Only One?

When I was 10 years old I was a geek. I was born into it. My parents dressed me as a Spider-Woman for my first Halloween, I had a Pac-Man themed 5th birthday party and my Dad used me as a ringer in living room Tetris tournaments against his friends.

I grew up in a small suburb of a suburb of Philadelphia. My fifth grade class had about ten other girls in it. The odds were stacked against me and, indeed, I found that I usually had more in common with the boys than I did with with my female classmates (though I did lead the girls in many awesome games of “Unicorn-Power-Princesses-Who-also-do-Karate-and-Magic”).

It gave me a weird sense of entitlement. *I* was the girl the boys chose to play with, *I* was the girl who could talk to them about the merits of each of the Ninja Turtles (clearly Donatello is the best), could discuss which X-Men was the coolest (Phoenix of course), and how we were going to beat Contra without using the Konami Code (can’t be done).  At age ten we were starting to notice the opposite gender and while the other girls were giggling about the boys they thought were cute, I was developing meaningful friendships with them. The girls didn’t “get” me, so I found boys who did.

My friendships with boys continued throughout high-school.  I was outspoken, obnoxious and not at ALL “lady-like”, I would frequently say things like “I don’t get along with girls.  Girls are bitches.  I get along with dudes much better”.  All those statements had an element of truth to them, but it was only when I became an adult that I realized how that attitude prevented from experiencing the awesomeness of being in a group of like-minded ladies.

I never realized how obnoxious this mindset was until I experienced it myself.  It was 1998 and it was my first venture into a comic book shop.  Growing up in the aforementioned small-town the only option for purchasing comic books was the grocery store.  When I graduated high-school and moved to Seattle I walked into my very first comic book shop and was greeted by the female (!) worker with “Are you looking for your boyfriend?”.  I was so mad I retorted “No, I was actually looking for the Incredible Hulk” and stormed out.  I didn’t go back into a comic shop for two years.

More recently I accompanied Super-Dad to a work function.  One of his co-workers brought a date and she and I started talking.  I mentioned that I liked comic books and she immediately got weird.  “Oh, yeah?  Look at this!”  she pulled up her shirt to reveal a full-back tattoo of the Preacher.
“Oh, Preacher, that’s an interesting choice for a tattoo.  Must be interesting for guys to look at back there” I snarkily replied back.
“Oh, you know who that is?” she snarled at me.

What the heck was going on here?  Instead of talking about a shared interest we were creating some sort of messed-up Preacher related girly pissing match.  We could have been having a discussion about violence in comics, about why she identified with such a strong character, about why I generally dislike Garth Ennis’ books.  Any of these topics would have been better than the “nanny nanny boo boo, I like comics more than you do” standoff.

Some of us geek girls suffer from what I’ve deemed “There Can Be Only One” Syndrome.  So many of us are used to growing up isolated from other girls with similar interests that we have developed this “I’m special” defense mechanism that automatically makes us wary of any other girl claiming to be a geek.  Just like our weight, our clothes, our boyfriends, we view our geekdom as a competition, as a way to tear each other down and prove our superiority.

It’s time to get the hell over it, ladies.

Over the past seven years I have worked off and on  in a comic book shop, and at conventions.  I have realized the error of my ways.  One of my favorite things to do is to spot a bored girlfriend and introduce her to the world of non-superhero comics.  I’ve sold so many copies of Fables and Y:The Last Man to women who didn’t think that there were comics for them that Vertigo should give me kickbacks.

I am now happy to say that there are lots of women that I love and get along with.  I spent all of those years missing out on the powerful friendships that nerdy girls can share. I have forged fantastic relationships with geeky girls of all varieties.  Many of them even geekier (gasp!) than I am! Together we are providing awesome inspiration for my four year old daughter.  She’s a budding geek herself,  who doesn’t yet know that it’s “weird” that she likes superheroes and Star Wars.  And I hope that by the time she’s ten it won’t be.

May 16, 2011 By Sharon Feliciano in geek girls, NASA No Comments

Airplane passenger Steffanie Gordon snapped this photo of the Space Shuttle Endeavour from a flight from New York to Florida. 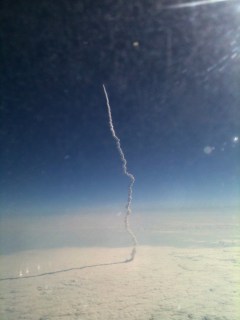 She took the photo with her iPhone, tweeted it when she landed about half an hour later and experienced a taste of viral fame as the photo got retweeted by NASA, The Weather Channel, ABC News and thousands of other people.

You can read her blog (about being a woman in the sports industry, how cool!) here.