It’s down to the wire for Mother’s Day gifts, my friends.  With all I have to do in the next few days I realized I would have no time to shop for a Mother’s Day Gift for Super-Grandma before we see her on Sunday.  As a matter of fact, I won’t even have time to stop at store.  I needed to come up with a gift that was thoughtful and something she could use, and I had to be able to make it with things I already had in my house.

Super-Grandma, like many people, enjoys a nice hot shower.  I thought it would be nice to make her a nice treat that she could use for a little pampering.  I decided on a Vanilla Lime Sugar Scrub.

The ingredients are easy, you probably already have them in your house. Lime – You only need the zest

Food grade oil -I used liquid Coconut oil to go with the lime, but olive oil is perfectly fine and any vegetable oil can be used.

A jar – You can reuse an old spaghetti sauce jar or even tie a bow on a baggie if you don’t have any canning jars laying around.

First, put the sugar in a bowl, and grate some lime zest into it.  I probably put about 2 tablespoons in my 1/2 cup of sugar. Mix with a spoon. 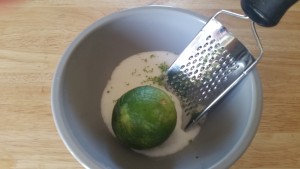 Next, add the oil.  I used two tablespoons for the 1/2 cup sugar.  You want it to be kind of a slurry.  It doesn’t have to be exact!  If you are adding vanilla extract, don’t stir it yet.  I prefer to put the vanilla on top of the puddle of oil, it mixes in better that way, in my opinion.

You only want to add one or two DROPS of vanilla extract.  It’s strong, and it has a lot of alcohol in it. Too much and it’ll be stinky, will dissolve the sugar and could potentially sting Mom’s skin. 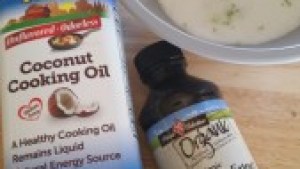 Then stir it all up and stick it in the jar.

Don’t have lime? You can use just the vanilla or any other food grade extract or oil.  You can also use the leaves from inside a tea bag (Mint or hibiscus would be especially nice), a little cinnamon or a few spritzes of her favorite fragrance. 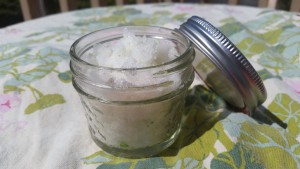 BONUS: I created some geeky labels to adorn the top of your jar. You can wish your mom Happy Mother’s Day in Gallifreyan, Dothraki (it says “Mother of Dragons”, of course), Klingon, or
in binary!  Plus some other geeky labels, a label with Vanilla Lime Sugar Scrub and one that just says “Happy Mother’s Day” for all the non-geeky mom’s in your life.  These are sized so that you can print them on Avery 22817 canning lid labels or just print it on paper, cut it out and glue it on.  You can cover it in clear packing tape if you’d like it to be more water resistant 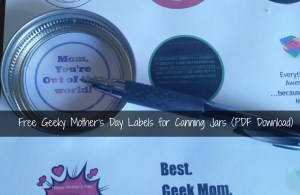 Shhh….don’t tell the kids, Super-Dad and I are headed to a press screening on Tuesday.  I’ll have a parents guide up before the movie opens on May 1!  To help with the wait, Disney has sent me some Avengers coloring pages that you can download and color with your kids!

Here is what the Black Widow page looks like (and it’s indicative of the other pages featuring all of the Avengers and Scarlet Witch, Quicksilver, Nick Fury, and Ultron) : 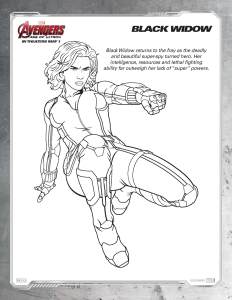 If coloring is not your thing, you can get prepped by (re)watching the trailer:

Oct 30, 2014 By Sharon Feliciano in crafts No Comments

If you follow me on Twitter (@ParentingGeekly) you may have seen some of my “half-assed cosplay” posts last week.  See, I have this idea that homemade costumes are the best costumes.  I feel this way despite my lack of sewing skills and complete absence of attention to detail.  Every year I “half ass” it, and every year we get a bunch of compliments.  I am a crazy perfectionist, convinced that  everyone will mock my hot glue and hem tape efforts, and then surprised when they turn out okay-ish.
Why am I sharing this humble-brag?  Because you can half-ass cosplay too!  It just takes an idea, a little creative thinking and a good attitude.  Seriously, half of the costumes I am going to share started when one of the kids had an idea, which I promptly shot down for being too hard or too complicated.  It was their insistence that kept my gears turning, which eventually led to successful costumes.
My tips:
Here are a few of our costumes and how I made them:

Sugar Skull and Voodoo Guy  (and my bestie’s Mermaid costume).

This one just required raiding my closet for some leftover clothing from my goth phase and a lot of practice with makeup.  I did this one in 2010, before it was popular (hipster!) and so I had to base the makeup on some Dia de los Muertos pin up art.  Super Dad invested in a Goodwill vest, a re-purposed alligator tooth necklace from an old  pirate costume and the face makeup from my costume. My friend Karen took a store bought mermaid costume and added her own wig, some jeweled decals from a nail art kit (applied with eyelash glue) and a quick trip to the drugstore for some makeup. 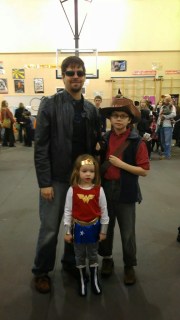 Kit’s Wonder Woman costume was bought from the clearance department because it was missing all of its accessories.  I think my mother found it for about $3.  We made the tiara from gold cardstock, the bracelets from glittered foam sheets and the lasso from the same gold elastic cording that kept the tiara on her head.  The boots were bought from Goodwill, and built up with duct tape, spray painted blue, and then trimmed with more duct tape, in white.

Super-Dad’s Tony Stark Costume was created around an expensive t-shirt from ThinkGeek that lights up to look like the Arc Reactor is embedded in his chest.  He already owned the coat, and the goatee.  The only other accessory we had to get him were the sunglasses, which were purchased for 99 cents at a second hand store.

Nate is the Sniper from Team Fortress 2 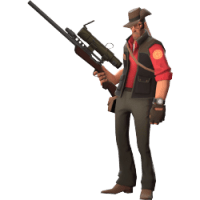 The shirt and vest both came from the ladies’ department at the thrift store, the pants came from the boy’s department (and were a little short – let go of perfectionism)  I made his side pouch from felt and hot glue, and we modified an Indiana Jones hat by gluing the flap up.  The alligator tooth necklace makes its final appearance as hat trim. 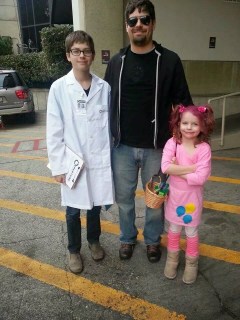 We had to buy another pair of sunglasses for Super-Dad, but we were glad to get another wearing out of that expensive shirt.

Nathan has on a lab coat purchased from a Medical Uniform Shop for under $20.  We created the Aperture logo using Inkjet Iron on Paper, he also had a bigger aperture on the back.  He carried a clip board with a “Test Subject Questionnaire” that we created.

Kit’s Pinkie Pie costume was one I wasn’t sure I could pull off.  It came together when we decided to do something that was kind of inspired by Equestria Girls, but stayed true to the look of “regular” Pinkie Pie.  I hand stitched the Cutie Mark onto a store bought skirt, added leggings and leg warmers, made a felt Gummy the Crocodile with felt and glue.  With used silk flowers to suggest a curly mane/ears and sprayed her hair pink. 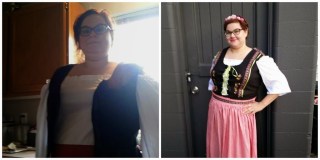 I have before and after pics for this one, because I knew that if I pulled it off it would be a pretty big transformation. This was created for an Oktoberfest party, and will be reworked into Little Red Riding Hood this Halloween. I started with a thrift store “Medieval Bar Wench Costume”.  I added the green ribbon lacing, some ribbon trim and some appliques. All hot glued on.  The apron had a frilly top, which I hacked off, and then added some matching ribbon to the waist.  I cut off most of  the clingy polyester red skirt that was attached to the bodice and wore a plain black skirt over it.  I borrowed Kitty’s flower headband and braided my hair into a crown to complete the look. 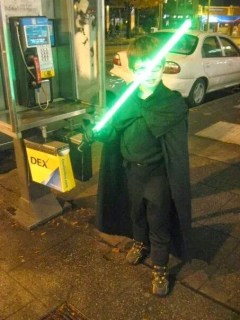 This was my first attempt at making a costume.  He wore an all black outfit and some black costume gloves.  The cloak was an unhemmed piece of fleece cut to size and pinned on with a safety pin. We had the lightsaber.  Everyone thought he was Harry Potter. 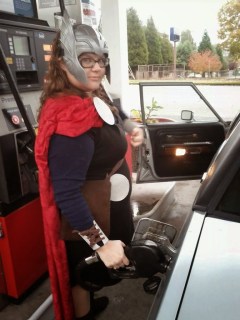 Probably my favorite costume ever.  We had the toy headpiece, I made the Power Discs out of silver cardstock and stuck them to a black dress I already had using double-sided tape.  The cape was unhemmed velour, cleverly pinned on using hidden safety pins.  I layered the whole thing over a  long sleeve blue t-shirt.  The cuffs are glittered foam sheets with fake leather lacing. 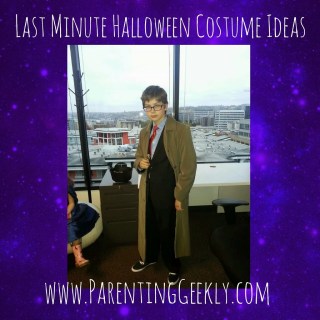 Nate won “Coolest Kid Costume” at Super-Dad’s office party with this one.  We bought the Sonic Screwdriver from the comic shop.  The trench was thrifted (once again from the ladies’ department) and we bought some cheap Keds knockoffs for under 10 dollars.

I hope you have found inspiration in this post!  Most of these were made at the last minute, you still have time to half-ass your own costume!  If you do, or if you have, please post a link to photo in the comments!
1 2 3 4