Mar 24, 2015 By ParentingGeekly in cool stuff, STEM No Comments

Have you ever tried to find cute space or dinosaur themed clothes for your little girl and struck out?  I still remember the day when Kit was about four and fell in love with a T-shirt screenprinted with a rocket,  she looked up at me and said “But Mom, this is the boy’s department!”  I had hoped that she would never notice or care that many of her favorite clothes came from the “boy section” of the store; but the day came and it was much harder to sell her on the “boy’s” stuff when the “girl’s” department was full of items in aqua blue and pink, her favorite colors.  It’s true that stores like Target are finally stocking superhero and other licensed properties like TMNT in more traditionally feminine styles, but more generic themes like dinosaurs and space are still hard to come by.

That why I LOVE Seattle based company buddingSTEM and their kickstarter. 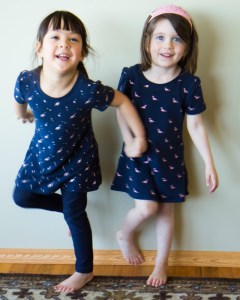 We tell our girls they can do anything, be anything they want to be.

But the images on their clothes tell them otherwise. Young girls get pastel princesses and fairies, while boys get trains, planes and rockets.

Those images tell young girls that things like science and engineering are best left to the boys.

A Seattle startup, buddingSTEM, has set out to change that by making girls clothes celebrating science, technology, engineering, mathematics and other fields typically marketed to boys. The company is the creation of two moms with young daughters,  Jennifer Muhm and Malorie Catchpole.The response has been overwhelming. buddingSTEM has already raised more than $38,000 on Kickstarter.

They recently reached a stretch goal and are offering girl style underpants (thank you Jennifer and Malorie for not calling them panties {Shudder}).  UNDERPANTS WITH DINOSAURS, you guys!  I want some in my size!

I had hoped that Kitty would never care which side of the store her clothes came from, but she does.  I am thankful to moms like Jennifer and Malorie for recognizing that girls deserve cute, feminine designs that represent and encourage their STEM interests.

Star Wars family decals are way cooler than the stick figure ones most families have.

At this point I think I just need to sign my paychecks right over to Think Geek.

I am not a fan of car window family decals.  I just don’t get the point of wanting weird stick figure representations of the members of your family (really only identifying their gender) on the back of your car. 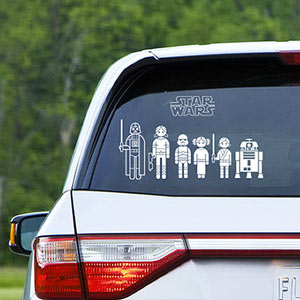 I am however, seriously considering buying some of these Officially Licensed Star Wars Decals.  for $14.99 you get 50 decals, with 19 separate characters to choose from.  So Mom’s truck can have Han+Leia= Yoda and R2-D2  and Dad’s car can have Darth Vader + Padme = Kid Luke and Leia.   The set comes with 12 Stormtrooper Kid decals, so even the largest geek families can represent!

The First Full Trailer for the New Muppet Movie!

This was leaked late tonight.  I’m so excited, it looks amazing!  I don’t see any Sesame Street cameos, though which is dissapointing, but it *is* just a trailer and I’m sure they didn’t want to ruin all of the surprises.

What do you think?