Nov 6, 2014 By Sharon Feliciano in Uncategorized No Comments

Last night the whole family went to a screening of Big Hero 6, the newest offering from Disney Animation Studios.  The film was delightful. 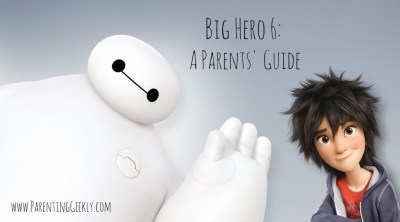 The movie centers around 14 year old robotics prodigy Hiro.  Hiro’s brother Tadashi, a robotics genius in his own right, tries to motivate his under-achieving brother by taking him on a tour of Tadashi’s workplace, a robotics research lab.  After a terrible tragedy changes their lives, Hiro goes on a mission to defeat a mysterious Kabuki mask wearing super-villian.  He creates a team consisting of other university employees and Baymax, the medical assistant robot Tadashi designed.

It’s a little curious to me that Disney decided to release this under the Disney Animation Studios banner, as opposed to Marvel Studios. It’s very loosely based on an obscure Marvel comic series from the 90’s.  Super-Dad and I speculate that they didn’t want to tie this film into the Marvel Cinematic Universe, and so they left the Marvel Studios branding off.   But this could TOTALLY be a Marvel film.  Marvel’s Chief Creative Officer Joe Quesada consulted on the production, there was the Marvel de facto after credits scene and the obligatory (and cleverly done) Stan Lee cameo.

The story, based in the fictional mash-up city of San Fransokyo is beautifully animated. The script feels heartfelt, the character development is laudable, and the voice acting is top-notch.  There were many big laughs, as well as several somber, emotional moments.  This is definitely a must-see for the geeky family.

There is no offensive language in this movie, not even a “crap”.   There is some intense action, though no one is seriously injured in any of the fight (though it’s not for lack of trying).  There are a few tense scenes, and the off-screen deaths of two characters.

I was actually really surprised by the level of emotion that I felt during the film, I expected a kids action comedy, and instead got a touching story about loss, determination, and applying your talent. Hiro experiences some pretty traumatic losses during the film and a big theme of the movie is how he processes his grief.  In the screening we were in a little girl (probably around age 5 or 6) got pretty upset and was crying.  I cried a few times during the movie, but at one point was actually fighting off sobs.  I am a crybaby and so it’s no surprise that I would be affected in such a way, but 14 year old Nathan whispered to me for a tissue as well.  Kitty was convinced that there would be a happy ending, so she was able to hold herself together.  Apparently her grasp of fictional narrative kept her eyes dry.  I would expect that smaller children may have some questions about death and loss after viewing this one, but anyone aged 8 and up should be fine. Bring the tissues.