Parent Guide – Avengers: Age of Ultron (or, is Avengers 2 Appropriate for kids?)

I saw Avengers: Age of Ultron at a press screening last night. I watched with an eye towards the question I’m always asked when these superhero movies come out: “Can I bring my 6 year old to Avengers: Age of Ultron” (Seriously, six is the age that brings the most search inquires to my site for every movie).  I totally get it, one of the reasons that I started this site was because I couldn’t find parent guides that fit my family’s needs (nerds with nerd kids who were probably a little more liberal with the content they let their kids view in that context than many mainstream parents would be). Parents want to know if the superheroes their kids adore in print and on the small screen translate to an age-appropriate big screen experience.

So, with that in mind, this isn’t a critical review of Avengers: Age of Ultron, – you’ll find tons of those all over the internet –  but a parents’ guide written with geeky parents in mind.

So, is Avengers: Age of Ultron appropriate for kids?  Here are some of the things you might want to keep in mind:

Sensory issues –There is a lot of action, it’s almost non-stop.  If you have a kid that experiences sensory issues, it may be a bit much.  Super-Dad and I saw it in 3D, I have vision issues, and found the fast moving fight scenes painful to watch in a few instances and removed my glasses.  I don’t see 3D, and I didn’t feel like I was missing out on anything, so if you think this could be a problem for your child you may want to opt for a traditional 2D viewing.

Violence –  There is a lot of violence, though blood and gore is minimal.  The violence can be pretty intense, as it affect children, other civilians and characters we know.  There is a prominent death scene that may be upsetting for some viewers. 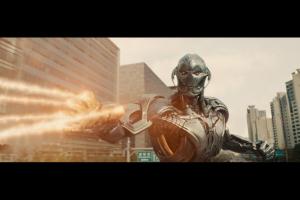 Language – There is a fair amount of mild swearing (damn, hell, ass), and one utterance of “shit”.  The other characters make fun of Captain America throughout the entire run time for protesting the use of bad language by his teammates.

Sexual Content – Avengers: Age of Ultron probably has the most sexual innuendo of any of the Marvel films to date.  From an abundance of racy one liners (which will more than likely go over most younger viewers’ heads) to an actual sexual relationship, which is more than hinted at, but not shown, I found it to be a bit risque.  For the most part sexual content of this nature isn’t really an issue for our family, but there is probably enough here to make less permissive families a bit uncomfortable.

Scary and emotional Content – There is definitely a creep factor to the main villain, Ultron.  He is a sarcastic robot. made by Tony Stark, who is bent on destroying humanity.  He repeatedly sings “I”ve Got No Strings” from Pinocchio in a menacing way, which may be upsetting. 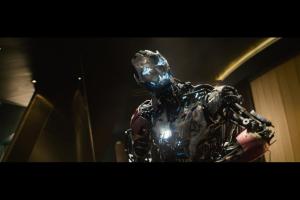 Scarlet Witch causes other characters to hallucinate, and some of those scenes are dark and a bit scary.

Scarlet Witch and Quicksilver talk about the violent death of their parents in a war.  The story of their survival in a war zone is also discussed and is pretty emotional.

It’s also worth noting (and this may be a small spoiler if you are unfamiliar with Iron Man’s Hulk-Busting armor and therefore didn’t extrapolate this from the previews) that the Hulk rampages pretty hard at one point, putting many civilian lives at risk.  This results in a pretty brutal duel between the Hulk and Iron Man.  Young Hulk fans may find this hard to understand.

Things I love and that I think would be great talking points for kids;

Teamwork – The first Avengers movie really highlighted a group of individuals who were had different moral values, work ethic and life stories coming together to work as a team.  This is still a major part of the plot, with the characters differences causing the major conflict in the film.

Second chances – The current Avengers also embrace several new members in this film, allowing some of them to redeem themselves by joining the team.

Strong female characters –  Black Widow plays a much more prominent role in this movie, which was great to see. Maria HIll is also back, and a new addition to the cinematic universe, Dr. Helen Cho, uses one of her own inventions to save an injured Avenger. 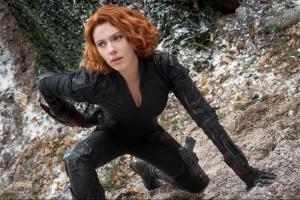 Final Thoughts and recommendations –  We are having reservations about bringing Kitty, who is eight.  She is really looking forward to seeing it, so if we take her we will talk to her about some of the things she will see beforehand.  I would say that this one is definitely better for ages ten and up and possibly even older if your child is especially sensitive.

Avengers: Age of Ultron is rated PG-13 and opens in theatres everywhere on May 1.